Book from own collection : Wilhelmina martial in a shapeless coat 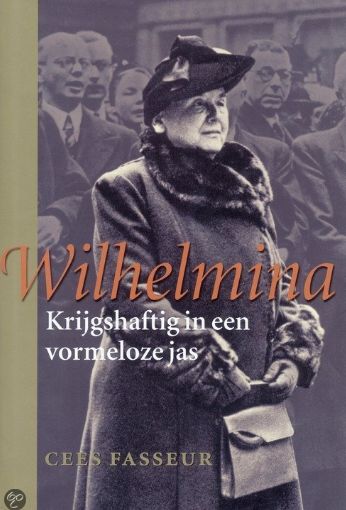 This biography, with a number of  black and white illustrations and a portrait of Wilhelmina on the cover, is an absolute must.

The Second World War is central to part two of the monumental biography of Queen Wilhelmina. In the five years of her exile in England, she experienced the bleakest and most beautiful hours of her long reign. In London, she was the voice of freedom and warring for the people of the Netherlands, the mother of the Engelandvaarders, but also the champion of political renewal efforts that brought her to the cabinet in violent conflict.

Wilhelmina did in this eventful years report in numerous letters to Princess Juliana in Canada. Those letters are published here for the first time, alongside other pieces from her personal archive which Cees Fasseur as had first unlimited access to.

The period between the World Wars is also part of the book. Wilhelmina’s search for a suitable marriage partner for her daughter, the money worries of Prince Hendrik, her travels and political meddling. Clear, thorough, detailed and at the same time is the panoramic image of the queen and outlined her time.