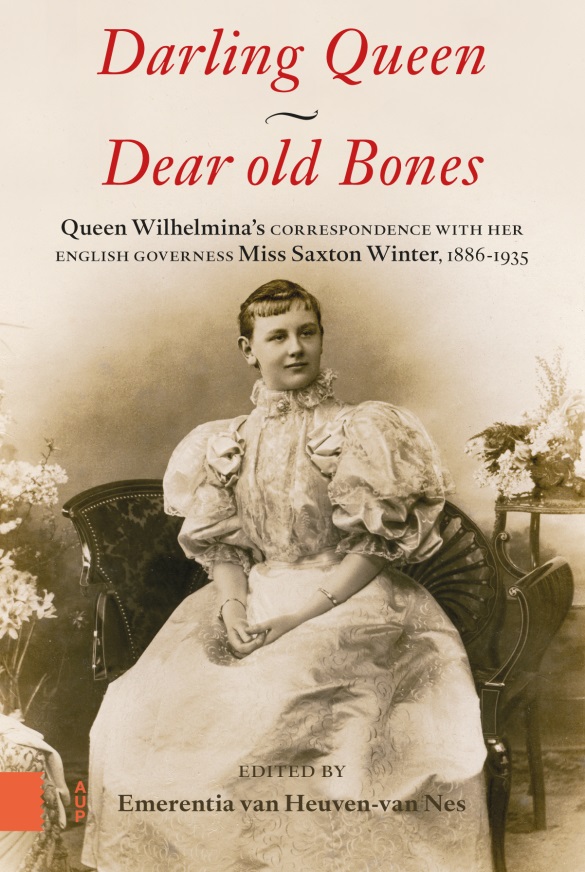 It is rare that a book on the Dutch Royal House Orange-Nassau is published in English. Now there is a unique book on the subject, Darling Queen – Dear Old Bones presents a remarkable collection of letters, a total of 249 written letters published for the first time in their original form, from Queen Wilhelmina of the Netherlands (1880-1962) and her English governess, Elizabeth Saxton Winter (1855-1936).

During the Second World War, Queen Wilhelmina stayed in London, where Winston Churchill, in response to her strength and determination, described her as ‘the only man among men.’ For this, Wilhelmina owed a great deal to her English governess Miss Elizabeth Saxton Winter who was employed by the Dutch court from 1886 to 1896 and played an important role in the education and upbringing of Wilhelmina.

The earliest letters are those of a child, sent to Miss Winter while she was on holiday in England, but after Wilhelmina’s education was finished in 1896 and she had no more need of a governess, she continued to write to Winter weekly. These long letters cover a wide range of subjects including Wilhelmina’s youth at court, her hobbies: horse riding, skating, drawing and painting, her private primary school education, as well as birthdays, Sinterklaas and Christmas parties.

They offer her perspective on people and events, encounters with famous individuals, kings and emperors, but also sad times and loneliness, her belief in the Almighty, and above all, her development to her role as queen – her inauguration was in 1898 – and the high seriousness with which she regarded her duties. The resulting volume offers unprecedented insight into her life as child of her mother queen-regent Emma, as queen, as wife of prince Hendrik and as mother of princess Juliana.

In addition, there are letters from Wilhelmina to queen-regent Emma, princess Juliana and others, bringing the total up to 320 letters. The collection also includes family trees of the European royal houses with whom they were close with and whose members appear in the letters. The introduction and detailed annotations accompanying the letters are written by Emerentia van Heuven-van Nes.

Emerentia van Heuven-van Nes worked at Paleis Het Loo National Museum, Apeldoorn, for more than thirty years, where she was curator of prints, drawings, and photographs, and head of the educational department. She organised a lot of exhibitions, wrote books and articles, appeared on radio and television, and gave lectures at home and abroad. She is Knight in the Order of Orange-Nassau.

“Darling Queen-Dear Old Bones”,is about the letters Queen Wilhelmina of the Netherlands wrote to her governess Elizabeth Saxton Winter, until her death in 1935. The letters were all written in English and the book contains a few more than the Dutch version of the book, as some letters were only found more recently.
It is about 250 letters, but also a number of telegrams. ‘New’ in the English edition are sixteen recycled letters from Saxton Winter. Kept by a cousin of the governess of Queen Wilhelmina.
In the younger years of Wilhelmina she was writing her letters to Saxton Winter in phonetic English, it even makes your laughing. In the letters between the two you also feel a little bit of the loneliness of the young Queen. Her best friends were her dolls in that time. Wilhemina treated them if they were like real people.
Wilhelmina called her governess Dear old Bones, probably because she was not walking well. The Queen was called Darling Queen by Saxton Winter.
After the completion of Wilhelmina’s education in 1896, Elizabeth Saxton Winter had to working for the Young Queen., but the bond between the two remained. Every Sunday, Wilhemina wrote a long letter to her former governess, telling her honestly and openly what she was doing and who she met. Because she told everything to Saxton Winter, these letters are important for the Dutch Royal Family Historiography.
After reading this book you realizes that a Queen is also human, with her mood, illnesses, colds, worries, concerns etc.
It really is a book the get to known the person behind the name ” Queen Wilhelmina” .
Highly recommended if you are interested in Dutch history